On health care, Democrats say focus should be on costs — CBS News poll

Health care remains a dominant — perhaps the dominant — issue in the 2020 Democratic primaries. Nearly nine in 10 Democrats in the early states through Super Tuesday call it “very important,” outranking any other issue we asked about in the latest CBS News Battleground Tracker poll, and the split over what to do about it marks ideological divisions within the party that could shape the contest.

Out-of-pocket costs are the top concern regarding health care (36%), ahead of access to health care (21%) and coverage of pre-existing conditions (21%).

More than half of Democrats in these states favor the creation of a “Medicare for All”-type health care system and largely support a tax on the wealthy to help fund it. Few Democrats outright oppose such a plan, but over a third say it depends on the plan’s costs and the details. But there are ideological differences, too. Liberal Democrats — particularly those who identify as very liberal — favor Medicare for All, but fewer than half of moderate and conservative Democrats do. 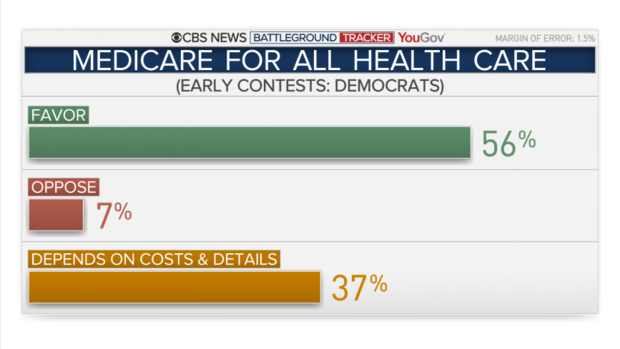 Health care views mark vote differences in the Democratic primaries, partly because of ideology and partly because the candidates have put forward different plans. Those who oppose or are unsure about a Medicare for All plan are much more likely to be supporting Joe Biden. The race among those who favor Medicare for All is more closely contested among Elizabeth Warren, Kamala Harris and Bernie Sanders, along with Biden. Warren and Sanders’ backers, in particular, back a Medicare for All plan in large numbers, with three in four favoring it. Fewer than half of Biden’s voters do. 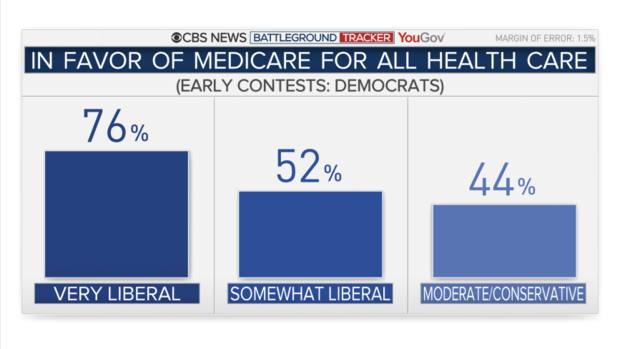 There is a general reluctance among Democrats to completely replace private health insurance with a national program. Almost two-thirds think a national health care plan would work best if it competed with private insurance.

Among those who favor the creation of a Medicare for All plan, 50% think a national plan should compete with a plan like Medicare for All, while 50% think it would be best if such a plan replaced private insurance entirely.

These splits extend to the voters who support candidates like Sanders and Warren, as well. Most of Harris’ backers would have a national plan compete with — but not replace — private insurance.

But Democrats could also see health care policy as related to electability for their candidate and party in 2020, which we know they prioritize. Most say the best chance Democrats have to win over swing and undecided voters is to have a health care message that focuses on lowering costs rather than one that emphasizes a national health insurance program. 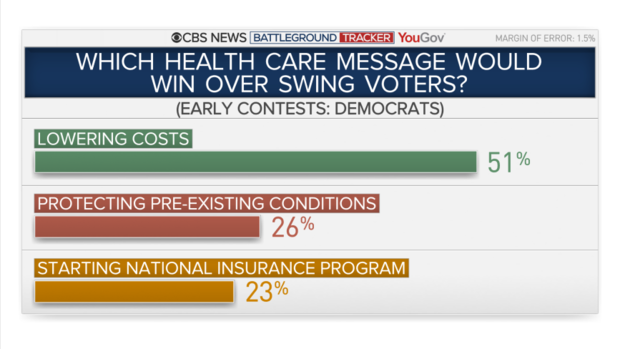 In the first Democratic debate, candidates were asked whether undocumented immigrants should be covered by government health insurance. Fifty-four percent of Democrats in the early states favor allowing undocumented immigrants to enroll in health programs like Medicare or Medicaid, while 46% are opposed. Here too, there are differences by ideology. Three-quarters of very liberal Democrats are supportive, but that drops to 52% among those who are somewhat liberal and 39% among moderates and conservatives. 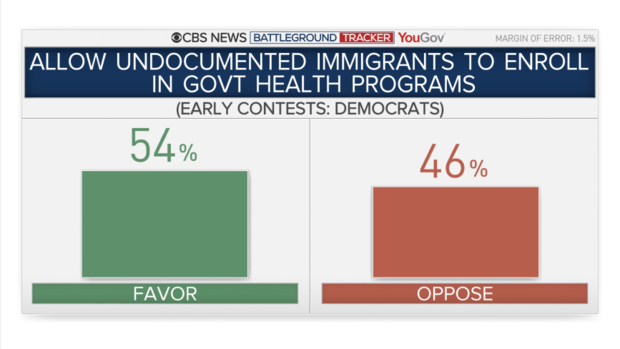 This CBS News survey is conducted by YouGov between July 9 and July 18, 2019. A representative sample of 18,550 registered voters in 18 states expected to hold early primaries and caucuses (Alabama, Arkansas, California, Colorado, Iowa, Maine, Massachusetts, Minnesota, Nevada, New Hampshire, North Carolina, Oklahoma, South Carolina, Tennessee, Texas, Utah, Vermont, Virginia) was selected. This sample includes 8,760 self-identiﬁed Democrats and Democratic-leaning Independents. This sample was weighted according to gender, age, race, and education based on the American Community Survey, conducted by the U.S. Bureau of the Census, as well as 2016 presidential vote. The margin of error is approximately 1.5%.