COLUMBUS, Miss. (WCBI) -Many charitable organizations depend on and even survive on the generosity of others. Unfortunately, one non-profit organization’s loading docks have become a donation dumping ground.

There’s a time and a place for everything. And The Salvation Army sees that people want to give, just not at the right time.

This is what workers at the Columbus Salvation Army were doing first thing Wednesday morning: cleaning up piles of clothing that had been dumped outside the building over several days. 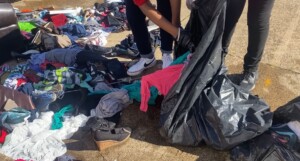 Captain Pradeep Ramjii of the Columbus Salvation Army said their loading docks have become a dumping ground for area residents over the weekends.

And that can become a mess to clean after stormy weather.

“When the items are not useful and are presentable to the customers, then they will go to the dump,” Ramjii said.

During Covid, the store hours and staff were cut to save money. However, the constant dumping has created a larger bill for the organization.

“Due to these untimely donations and all this added up this year, I have to spend 5,000 the whole year for dumping charges,” Ramjii said.

Ramjii said before you unload your donation, check the store hours.

“I thank all the donors who give their donations which we can process, and that helps the salvation army, and that’s how we are surviving,” Ramjii said.

Captain Ramjii said that the store is looking to increase its hours soon to help receive incoming donations.

Also, the Columbus Salvation Army wanted to remind donors that their store is open from Tuesday through Saturday, 10 a.m. to 4:30 p.m.

The Rainwater Observatory shows guest a glimpse of infinity and beyond