A high school principal in North Carolina wanted to let his high school seniors know he’s thinking about them during quarantine — even though they’re not in school and can’t celebrate graduation like they normally would. West Craven High School Principal Tabari Wallace organized surprise parades for all 220 graduating seniors, so each one could have their own celebration.

Wallace gathered teachers, administrators, coaches, police officers, firefighters, and community leaders outside the school and broke them up into 14 groups. Each group got a parade route and a stack of personalized yard signs — one for each senior in the class of 2020, according to a press release from EdNC, a group of nonprofits and initiatives focused on education.

EdNC went with Principal Tabari Wallace as he visited high school seniors with a surprise parade. He gave each senior a yard sign with their name and photo on it, as a way to celebrate the milestone in quarantine. EdNC

The parade groups covered a total of 485 square miles, making sure each graduating senior got a visit. It took the participants about four hours to get to all the students.

“They said there was no way to do a parade out west because we service 485 square miles — well, we will show them,” Wallace said. “Eagles don’t follow tradition, we make tradition.” 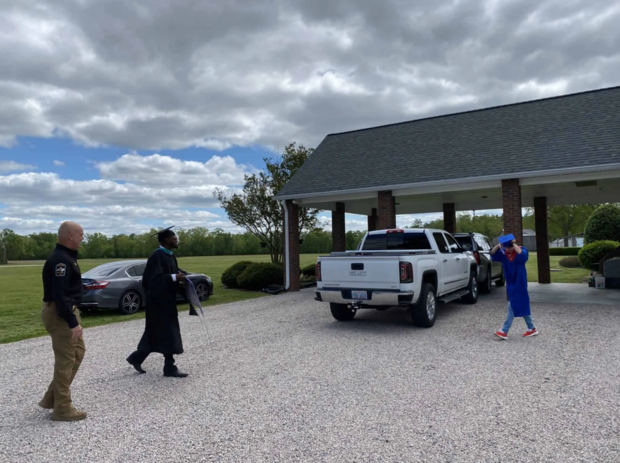 Some graduating seniors put on their cap and gown when they realized their principal was at their house in full graduation regalia. EdNC

Wallace himself visited 26 students. His parade group also included Craven Sheriff Chip Hughes, who stood by the principal’s side as he handed out the yard signs. The signs sent an important message, Wallace said: “You will graduate.”

“Please accept this as a token from the Craven County Board of Education, administration, and teachers until we can finally get you across the stage,” Wallace said as he placed the signs in the graduates’ yards, according to EdNC.

Video taken by EdNC shows several seniors shocked to see their principal was there, leading a parade of supporters past their homes. Some students even put on their own cap and gowns when they noticed Wallace dressed in graduation regalia.

Wallace won North Carolina’s 2018 Principal of the Year award, and there’s no question why: He goes above and beyond to make sure his students feel special.