MONDAY: Mostly cloudy, mild, and breezy with spotty afternoon showers possible. Highs should reach the low 60s despite cloud coverage, thanks in part to breezy south winds of 15-25 mph.

TUESDAY: A few heavier showers are possible early in the day, but rain should diminish toward midday. Some clearing is possible in the afternoon, which should allow highs to top out near 70 degrees.

WEDNESDAY: A warmer day is on tap with highs in the middle 70s ahead of a cold front. Showers and storms are likely to break out across the Arklatex/Arklamiss region in the afternoon and track into north & central Mississippi after sunset. While the thermodynamic environment isn’t overly conducive of major severe weather, wind energy remains high; therefore, a few strong to severe storms with gusty wind or a brief tornado are possible. Most storms should exit the region late Wednesday night. 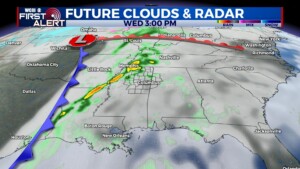 THURSDAY: Behind the front, some clearing will occur as any showers and storms will push east of the region by daybreak. Highs should stay in the 60s Thursday afternoon.

FRIDAY/WEEKEND: Chillier air returns Friday along with sunshine! It’ll be short lived as yet another system looks to swing in for the weekend. However, forecast models remain rather split on the track – stay tuned as we fine tune the forecast in coming days for Saturday and Sunday.