Sirhan Sirhan, who shot and killed Robert F. Kennedy in 1968, has been hospitalized after being stabbed in a prison near San Diego, officials told The Associated Press on Friday. The California Department of Corrections and Rehabilitation confirmed to CBS News that an inmate had been assaulted at the Richard J. Donovan Correctional Facility, where Sirhan is being detained.

A Cal Fire spokesman said his team transported the inmate, who was then transferred to a local hospital.

Officials did not directly name the inmate, but sources confirmed his identity to AP and TMZ, which first reported the stabbing.

On the night of June 5, 1968, presidential candidate Robert Kennedy had just given a victory speech after winning the California primary when he was shot three times. He died a day later. Five others were hit and survived.

Police arrested then-24-year-old Sirhan, who was originally sentenced to death but his sentence was changed when California briefly outlawed capital punishment in the 1970s. He has been denied parole several times.

Sirhan confessed to the killing, but said he had no memory of it. Last year, Robert Kennedy Jr. cast doubt on Sirhan’s guilt, saying that after meeting with Sirhan, he believes he was falsely accused.

He told The Washington Post that once he saw the autopsy report, “I didn’t feel it was something I could dismiss. I was disturbed that the wrong person might have been convicted of killing my father.” 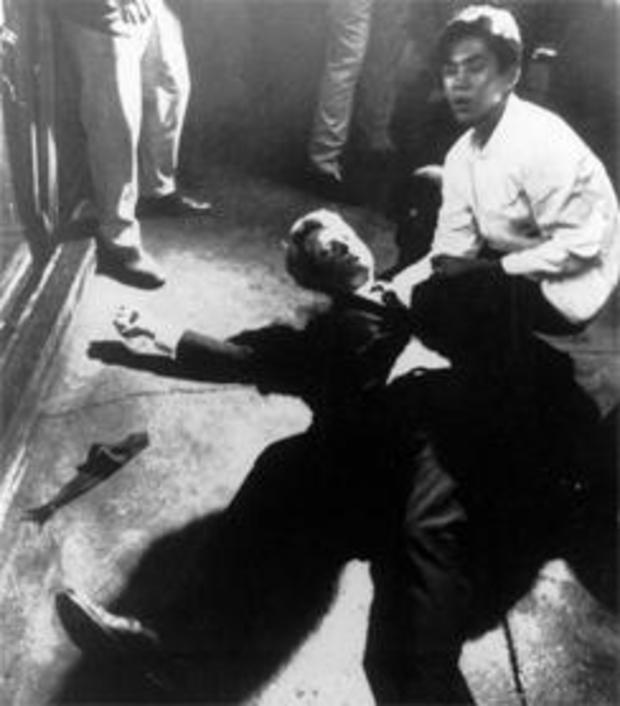 Senator Robert Kennedy awaits medical assistance as he lies on the floor of the Ambassador Hotel in Los Angeles moments after he was shot June 5, 1968. Boris Yaro/Los Angeles Times