A Sacramento Police officer was shot and killed after being ambushed while responding to a domestic violence call, officials said Friday. The department has faced criticism because it took 45 minutes to transport rookie Officer Tara O’Sullivan to a hospital, where she later died.

Chief Daniel Hahn released body camera footage late Friday at a news conference. Hahn said the attacker placed four weapons in different rooms of his house and shot them at officers who knocked on his door. The shooting continued for hours.

As officers entered the garage, an officer can be heard saying, “Hello, police department. If you’re in here, let me know. You’re not in trouble, dude,” CBS Sacramento reports. That’s when the suspect, Abel Sambrano Ramos, allegedly started firing at them.

O’Sullivan was behind the lead officer and was hit multiple times, police said.  Police retreated to safe positions and determined the tools they had would not be able to withstand gunshots from the suspect’s high-powered rifle. As a result, at around 6:30 p.m., police called for an armored vehicle.

Officers said they had difficulty getting the vehicle to O’Sullivan’s position because of multiple fences between them and where O’Sullivan was lying. And while police were moving onto the property in the vehicle, the suspect continuously fired at the armored vehicle.

Hahn said Friday that officers couldn’t immediately rescue O’Sullivan because the high-powered bullets could have punctured their protective vests, wounding or killing them.

Officers fired back at the suspect while others took O’Sullivan into the vehicle. As they were leaving, the vehicle became disabled and officers put O’Sullivan in a nearby patrol car where a California Highway Patrol officer with medical training tended to O’Sullivan. She was taken by that patrol car to the hospital where she was pronounced dead. 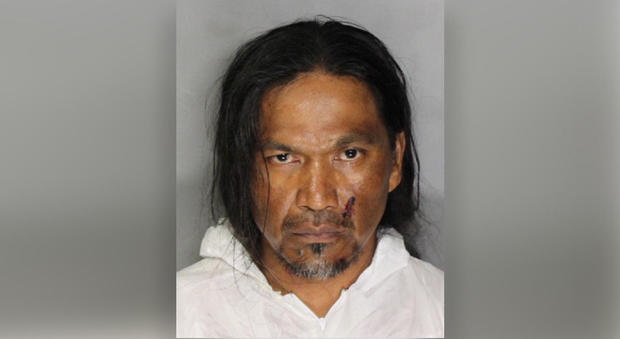 Inside Ramos’ home, police say they found four guns, two assault rifles, a shotgun and a handgun. Based on the number of shell casings spread throughout the home, police determined all four weapons were used in the standoff. They also found two more weapons in the garage.

Officers will be at the scene of the shooting throughout the weekend, processing evidence.

In all, officers fired more than 100 rounds at Ramos, but police have not determined how many rounds exactly Ramos allegedly fired at officers. They believe he fired at least 30 times at officers over the span of four hours.