TUPELO, Miss. (WCBI) – Mississippi’s Secretary of State says it’s important for people to vote in their local elections, even though there are no state or national races on the ballots.

Michael Watson was in Tupelo at the Bissell precinct this morning, to observe voting at the West Tupelo polling place.

The secretary of state visited with election workers and saw some of the latest technology at work.

Watson says local elections are just as important as the high profile state and national races.

“It’s where it all starts.  So your mayor, sheriff, supervisors, these are the ones you see at Wal-Mart, grocery store, church, and again, those are the ones you will be holding accountable the most because you see them so often,” said Watson. “Making sure you understand what their plans are, what do they stand for, what do they want to do with our county, community, our cities, and then going and supporting them.  And ultimately holding them accountable once they get elected.”

Voters at the Bissell Precinct were casting ballots for the District Three Supervisor Seat. 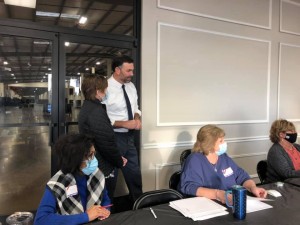 A U.S. Army soldier shares two ways he serves those around him

Above average temperatures ahead as warming trend ensues

Kiffin: "Maybe we were brought here to bring a state together."

Murder suspect escapes from the hospital