Social Q's for the age of coronavirus

Dear Social Q’s: I planned to interview writer Philip Galanes for “CBS Sunday Morning,” and then several people in my office building tested positive for the coronavirus. Do I need to warn him before I show up at his door?

“Absolutely,” said Philip Galanes. “It is what every single person in the country is thinking about and worried about.”

And whom better to turn to at a time like this than Galanes himself? For nearly 12 years, he’s been the wise and witty writer of “Social Q’s,” the column that helps readers of The New York Times resolve social dilemmas, from how to say no to friends seeking an invite to your summer home, to dealing with grief at a cocktail party.

Correspondent Erin Moriarty asked, “You say it’s not an etiquette column, but it’s social questions. So, what do you do?”

“As long as it’s an awkward relationship between people, I wanna be there for you,” Galanes replied.

And this pandemic has created all kinds of new conflicts to wrestle with. “The questions that I’m getting on coronavirus are so heartbreaking, because they’re the regular letters, but they have now an element of danger, or an element of something more moving,” he said.

“I am a 15 year old boy and I finally have a girlfriend (Yay!) I was so excited to ask her to the prom … But our school canceled prom because of the coronavirus. I literally went up to my bedroom and started to cry…”

Galanes said, “The question was, was there anything he could substitute for a prom at his school to make this special moment with his girlfriend still come off? And I thought, ‘Oh I love this!'”

These days,  Galanes, a 57-year-old lawyer, is writing his advice column at his home in East Hampton, where he and his husband, architect Michael Haverland, are riding out this pandemic.

Moriarty asked him: “Why you? What makes you qualified to help people with their social dilemmas?”

“There’s a tradition of advice columnists,” he said. “There’s Dear Abby, there’s Ann Landers. They were, like, lovely yentas who wanted to help people out. And so am I.” 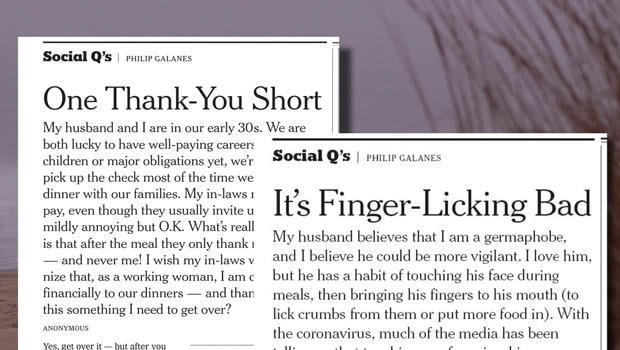 But Galanes never imagined the problems his family would face when he was 23, when his seemingly serene father took his own life. “If you could have known my dad,” he said, gettig emotional, “you wouldn’t have … I mean, you would think, ‘There isn’t a nicer guy.’ He was so sweet and so shy and so good. The fact that somebody like ….”

Galanes was devastated that he had missed the signs. “But the fact that could happen to him makes me think that we’re all … everyone has got something.”

He later wrote a novel inspired by his father’s suicide, masking his pain with humor. That caught the eye of a New York Times editor, and in 2008, “Social Q’s” was born.

“My boyfriend assumed I was Jewish when we met on J-date, a website for Jewish singles. Now … I am afraid he’s going to dump me because I didn’t tell the truth. What should I do?”

Galanes wasn’t kind: “Her name was Christiana. Like, a very, typically Jewish name!”

“Yeah, no, he wasn’t a rocket scientist, either! But I said, like, ‘Where to next, Christiana? Gay.com?’“

Moriarty asked, “So, you were using the column early on really to entertain the readers as opposed to enlighten?”

“It took me four years to figure out the volume of letters that were coming in from people who were really hurting, I think, as much as I was hurting,” Galanes replied.

But over time, the column, like Galanes, became much more empathetic. “I was a funny writer, definitely, I’ll give myself that. But it wasn’t what we needed,” he said.

So, his needed advice for the woman on an airplane who took video of a man punching the back of her reclined seat? “There’s no excuse for hitting the back of someone’s seat, or kicking it.,” he said. “But that impulse that she had is the impulse that I hate, the impulse to film you and put it on the internet and hope that he’s shamed into being a different person.”

He wants to encourage people to be kinder, even now in this pandemic, as panicked shoppers appear to fight for toilet paper and groceries.

Moriarty asked, “Someone buys up all the bread. Do you say something?”

“Do you want a loaf bread, or are you just being a community police?”

“So, that’s your answer? Don’t say anything?”

“And I know how hard it is, because trust me, there’s nobody who wants to shout at that woman buying all the bread like I do,” Galanes said. “But I’ve really – not all the time, but a lot of time – I don’t need to police what is right and what is wrong. Because for all we know, she’s making lunches for the entire East Hampton elementary school.”

That is, of course, with some social distancing in mind.

Pandemic or not, Philip Galanes is in the end an optimist. He often sees people at their worst, but believes in their best, and thinks this current crisis is an opportunity.