Some storms Wednesday, then much cooler late week

WEDNESDAY: Clouds and fog early give way to temperatures quickly climbing into the 70s to near 80 degrees, especially for the Golden Triangle and into west Alabama. Isolated showers and storms could form along the advancing cold front this afternoon, mainly southeast of the Natchez Trace into Alabama. Should storms form and be able to mature, damaging winds and hail will be possible. Otherwise, we expect a good portion of the activity to struggle to strengthen despite favorable moisture/instability.

THURSDAY: Colder air aloft moves in, and this will help keep scattered clouds around, but decent intervals of sun are also expected. Highs should drop back to the 60s.

FRIDAY: Clouds could become more widespread, and even cooler air is in store as highs hold in the 50s. It will be breezy at times as well, so this will add an extra chill in the air! 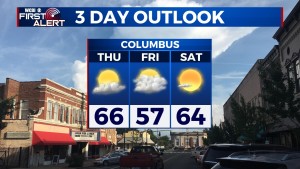 WEEKEND: There remains a high chance of frost Saturday morning, but some sheltered areas could even see freezing temperatures for a brief time. Another round of patchy frost is expected Sunday morning as well, as temperatures stay in the 30s. Otherwise, plenty of sun is on tap both days, and highs will be in the 60s Saturday and 70s Sunday.

NEXT WEEK: Scattered showers return Monday, and with increasingly warm & humid air, isolated storms could show back up Tuesday. Looking ahead to Wednesday or Thursday, signals are once again showing a round of stronger storms possible. Since this is a week out, we’ll monitor trends and keep you posted!