Amazon founder Jeff Bezos said Tuesday that his rocket company will partner with two aerospace giants and a leader in space navigation to offer NASA a hydrogen-fueled lunar lander that could meet the agency’s goal of putting astronauts back on the moon within five years.

Speaking at the 70th International Astronautical Congress in Washington, Bezos said the scale of a project like returning to the moon “is the kind of thing that cannot be done by a single company.”

“The things we really want to do in space have to be done by industry. And we have to add entrepreneurial dynamism,” he said.

Bezos said his company, Blue Origin, signed “teaming agreements” with Lockheed Martin, Northrop Grumman and Draper — the company that developed the Apollo moon program’s guidance software — to develop plans for a three-stage lunar lander that would carry astronauts from an orbiting lunar space station down to the surface of the moon and back.

Under NASA’s Artemis program, a huge Boeing-built Space Launch System rocket will propel Orion crew capsules, built by Lockheed Martin, on flights to the moon. An unpiloted test flight is planned for 2021 with a piloted Orion flight looping around the moon planned for the 2023 timeframe.

That will set the stage for a third flight as early as 2024 to carry astronauts to a small space station known as Gateway that will have been robotically assembled in a high lunar orbit. In its initial form, the station will consist of a power and propulsion element built by Maxar and a small habitable crew cabin built by Northrop Grumman.

From Gateway, astronauts will descend to the surface aboard a lunar lander of some sort. Because the space station will operate in a high-altitude orbit, a “transfer” stage will be needed to lower the lander to an altitude more suitable for landing. 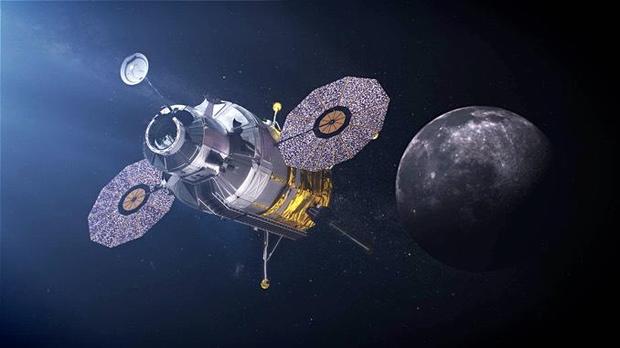 An artist’s impression of an Artemis lunar lander approaching the moon. Multiple companies, including Jeff Bezos’ Blue Origin, are expected to compete for NASA contracts to build landers for the agency’s Artemis program. NASA

Under contracts totaling $45.5 million, eleven companies have been studying lunar lander concepts, including Blue Origin, Lockheed Martin and Northrop Grumman. NASA has asked for actual lander proposals by November 1 and plans to award two contracts early next year. Whichever company is ready first will be tapped for the first lunar landing.

Blue Origin’s lander would consist of a transfer stage built by Northrop Grumman, a descent stage built by Blue Origin using the company’s hydrogen-powered BE-7 engine, and a reusable ascent stage provided by Lockheed Martin to carry astronauts back to the Gateway space station.

“We could not ask for better partners,” Bezos said.

The Amazon founder unveiled plans last May to build a lunar spacecraft called the “Blue Moon” lander, saying the company had been working on the project for the past three years.

In the plan outlined Tuesday, Blue Origin would serve as the prime contractor for the Artemis lander, leading “program management, systems engineering, safety and mission assurance,” the company said in a statement, while developing a descent stage “based on the multi-year development of the Blue Moon lunar lander and its BE-7 engine.”

Lockheed Martin will be responsible for the ascent stage, including propulsion, life support systems, flight operations and crew training. Northrop Grumman, the company that designed and built NASA’s Apollo lunar lander, will design the transfer stage while Draper will develop the necessary guidance software. 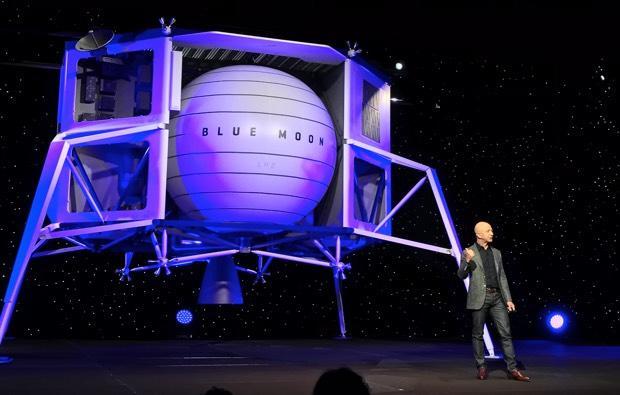 The Blue Moon lander concept was first unveiled in May. Blue Origin

“Northrop Grumman built the original (Apollo) lander, they now deliver cargo to ISS,” Bezos said. “Lockheed Martin is, as far as I know, the only company that actually lands on the surface of Mars. They are unbelievably competent in space. They are experts in life support systems, so to have their expertise on the ascent element is a really big deal.

“Draper is doing the guidance and control, an incredibly complex job for landing on the moon, especially when you want to do a precision landing. Of course, they did that for the original Apollo program way back then, but today it will be done in a completely new way.”

Building a new lunar lander from scratch in less than five years is considered the most challenging element in NASA’s new moon program, and not just from a technical perspective. The space agency will require significant new funding to make the Trump administration’s 2024 landing target a reality, and it’s far from clear if Congress will go along.

NASA’s original target was 2028. Agency officials have not said how much it might cost to move that up by four years, promising an accounting in February when the 2021 federal budget request is unveiled. But some have speculated the price tag for the moon program could run as high as $25 billion over the next five years.