A $12 million project is being considered in order to increase revenue in downtown.

STARKVILLE, Miss. (WCBI) – Starkville’s Main Street might be getting a facelift in the near future.

Downtowns can be the heart of a community. And the city of Starkville wants to give it’s downtown a recharge.

“You want the flow to be from City Hall to Lee Hall and back again,” Mayor Lynn Spruill said.

Since the city got a state grant, a $12 million project has been put on the table for city leaders to consider.

Mayor Lynn Spruill said the main goal is to get Starkville’s downtown to be the best place to be in the state – and even the region.

“I am so tired of Starkville being the tail-end of the discussion when it comes to nice SEC towns. We need to step our game up and I think this absolutely will do that,” Mayor Spruill said.

Pat Johnson has been the co-owner of Occasions on Main Street since 2004. She said after seeing how downtown has improved over the years, she believes the proposed will help bring more people in from out of town.

“It’s an image that carried not just in Mississippi but from all over the country. Instead of hearing about oh no, what’s Starkville have to offer? With a revitalization, our downtown kind of wakes up,” Johnson said. 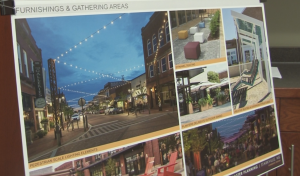 Mayor Spruill said by updating Main Street and making improvements, businesses will see more foot traffic that will affect their profits in the future.

“You create street furnishing or what they call it and have patio seating for eating. You increase your retail and restaurant space and linger. I mean that’s the goal is to have people who want to be downtown,” Mayor Spruill said.

“It just creates a good environment and the image is one of, we’re here, we’re good, we’ve arrived, we’re a really cool town now,” Johnson said.

Mayor Spruill said the sooner plans and renovations can begin, the sooner the city will reap the rewards for the increased tourism.

A homecoming seven decades in the making