Jahri Doss and Dawson Beard are both charged with aggravated assault and armed robbery.

The hold-up happened at a camper site off of Reed Road.

Kaya Rocha is charged with accessory after the fact and has a $10,000.

Investigators believe the suspects and victims know each other.

The victim was injured after being hit in the head. 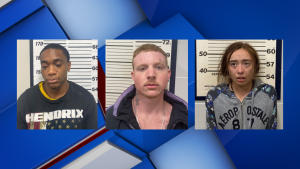