STARKVILLE, Miss. (WCBI) – A 19-year-old Starkville woman has been charged with attempted murder and burglary. 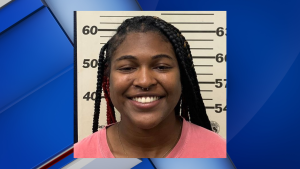 Detectives believe she broke into an apartment at 625 South Montgomery Street. That’s the Block Apartments.

Investigators believe Hall came back to the apartment in the early morning hours, returning and firing shots.

They believe the altercation was domestic.

No one was injured. A vehicle outside the apartment was hit with bullets.

That same vehicle may have been used to try and run Hall down, sources tell WCBI.

Starkville Police Chief Mark Ballard says this kind of incident is a reminder of the dangers of domestic violence.

Ballard also thanked the officers and detectives who made a quick arrest of the suspect.