COLUMBUS, Mississippi (WCBI) – Chilly weather will continue. Our next chance for rain looks to be on Monday and Tuesday as a disturbance passes by.

TONIGHT: COLD! Temperatures will dip into the upper 20s! Low near 28°. Widespread frost is likely, so a Freeze Warning has been issued for the purple counties through Sunday morning. Mostly clear skies. Bundle up if you’re heading out tonight! 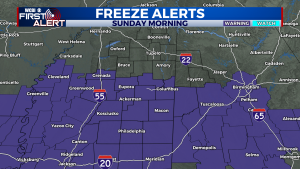 SUNDAY: Chilly and sunny. Frost is likely in the morning. High near 51°. It will be breezy at times, with winds out of the north around 5-10 mph. Higher gusts are possible.

MONDAY: A few degrees warmer. High near 57°. Most of the day will feature a mix of sun and clouds, but clouds will start to increase later in the afternoon as a low pressure system moves in from the southwest. Showers will likely move in around 8 PM and last throughout the night. Chance of rain: 70%. 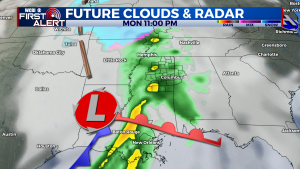 REST OF THE WEEK: Tuesday will be mostly cloudy and cool, with lingering showers in the morning. Skies will begin to clear up on Wednesday. The rest of the week looks dry and sunny for now.

Have a great night!