The increasing demands upon food banks

From the streets of Southern California, to the sidewalks of Maine, the financial fallout from the pandemic crisis is triggering a hunger crisis.

Food banks are struggling to find new ways to help record numbers of Americans who are out of work.

Dr. Jessica Rosati, chief program officer at Long Island Cares in New York, said, “Within the past month, we have seen an absolutely uptick of people that are now furloughed or unemployed. So, that’s a newer face that we’re seeing at the food bank.”

Long Island Cares distributes food bag-by-bag, and delivery-by-delivery to seniors and others in need who can’t leave their homes.

“In March alone, we distributed over a million pounds of food,” said Rosati.

CBS News business analyst Jill Schlesinger asked, “And what was the prior month in terms of pounds of food?”

The amount of food distributed by Long Island Cares in New York during March had gone up about 66 percent over February. CBS News

According to Feeding America, the nation’s largest hunger-relief organization, before the virus outbreak there were already 37 million people nationwide who didn’t have enough to eat. That’s expected to grow by an additional 17 million, an increase of 46 percent.

At the Trinity Jubilee Center, in Lewiston, Maine, they try to make sure every meal they hand out includes something hot.

“We’re seeing folks who we can tell have never had to ask for food before, and second of all, people who were already struggling,” said executive director Erin Reed. “Single parents, parents working low-wage jobs, elderly people, disabled people – they used to be able to get food from different places in the community. And a lot of those soup kitchens and food pantries have shut down. So, people are relying on us for even more food than before.”

Donations to the pantry are down, as local colleges have closed and supermarkets have less surplus food.

Reed said, “We’ve spent more on food in the past month than we have in the past six months combined.”

Down the street, at St. Mary’s Nutrition Center, they were busy pre-packing bags of food. Social distancing means that recipients are no longer allowed inside to choose what they want.

“People are doing a lot, but it still never quite seems like enough,” said community cooking educator Paul Drowns. 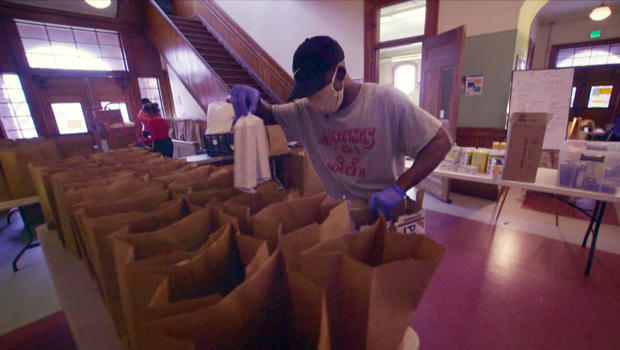 Across the country, in Southern California’s Orange County, the Second Harvest Food Bank has started a drive-through service on Saturdays.

Second Harvest CEO Harald Herrmann said, “The first day was unbelievable. We literally got crushed. The surge of cars coming to the Honda Center, which is where we have our distribution, was something I’ve never seen before.”

Herrmann said they’ve overhauled their procedures to ensure they’re not spreading the virus.  They had to reduce the number of people working in their warehouses.

“We’ve relied on volunteers for 37 years, and we have as many as 26,000 of them come through our doors on an annual basis,” he told Schlesinger. “But overnight [we] had to basically turn that tap of resources off, and figure out a way to work the food ourselves to be able to harden our defense.” 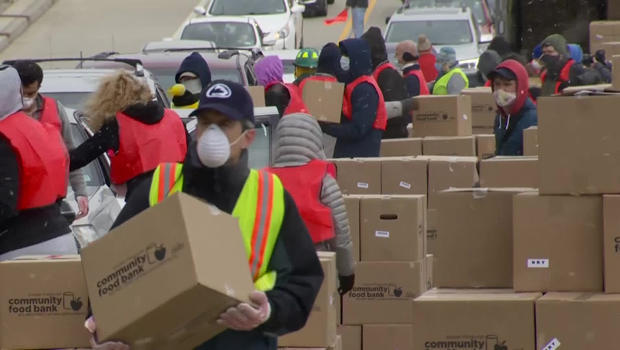 Food banks are struggling to find new ways to help record numbers of Americans who are out of work during the coronavirus pandemic. CBS News

In place of volunteers, they’ve hired 120 people who have recently lost their jobs, like musician Tim Gill: “The industry evaporated,” he said. “Concert tours cancelled, studio dates cancelled.  Within a span of a few days, it went from a full calendar of work to nothing at all.”

Along with a paycheck comes a box of food.

“We just have so much less income that we need this basic assistance, you know?” Gill said. “And it’s invaluable to know that we have these resources, that we’re not gonna be going hungry.”

Feeding America says that 95 percent of food banks in the country are seeing higher demand, and higher expenses. Over the next six months, it will take an estimated $1.5 billion, or 30 percent more money than they’ve been spending, to meet that need.

Second Harvest’s Herrmann said, “This food bank cannot close. There are hundreds of thousands of people right now counting on us. And it’s not just the food; it’s that little bit of hope that comes with that box as well. That normalcy that someone actually is out there looking out for you during a time that has a lot of people really uncertain.”