The National Hurricane Center had forecast another active hurricane season in the months leading up to June 1st of this year. Unfortunately, that forecast panned out – 2021 came in as the third most active on record. 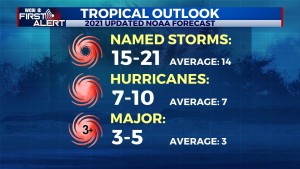 While the 2021 season had the same amount of named storms as the 2005 season, an unnamed storm was added retroactively…thereby making that season’s number 28. 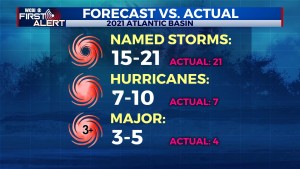 Seven hurricanes formed this season, and four of those became major hurricanes. Most notably, Hurricane Ida made landfall in southeast Louisiana as a cat 4 storm on the same day (Aug 29) as Katrina in 2005.

This season also used up the regular list of names, ending with Wanda. If any other storms form before December 31, the backup list of names will be used.