Joe Biden continues to be the first choice among Democratic voters across the 2020 primary states holding contests through Super Tuesday. However, rivals Elizabeth Warren and Kamala Harris are gaining on him and have seen increases in the number of voters at least considering them, suggesting they could have more room to gain going forward.

If we consider a 15% threshold as the minimum support needed to win convention delegates, then across the early states, four candidates would meet that benchmark: Biden, Warren, Harris and Bernie Sanders.

The contest is tighter now among estimated delegates across early states, the true measure of the contest — delegates to the convention. By this measure, Warren is much closer to Biden due to stronger showings especially in very liberal areas.

Biden’s support continues to benefit from his perceived electability against President Trump and positive ratings of his time as vice president, and he does especially well with voters who would prefer that a candidate take a more polite and civil tone.

But there may be a trade-off here, since Biden faces something of a passion gap when compared with other candidates who trail him. A majority of Democrats (56%) feel Warren will fight “a great deal” for people like them, and 54% believe this of Sanders, while a smaller percentage — 38% — describe Biden this way.

Respondents were given a list of candidate descriptions, and when asked to choose which candidate seemed the most “passionate,” Warren and Sanders tested highest on this measure (28% each), followed by Harris (23%). Fewer Democratic voters put Biden at the top of the pack on this characteristic (14%).

Warren is seen as the most “specific” of the top-tier candidates by a wide margin (42%) over the others. Related to that specificity, Warren also outpaces the field with voters who see her as most “prepared” in the campaign so far. (Those who see her as most specific also feel she is most prepared.)

Harris, more than the others, is perceived as “strong” (32%), with Warren and Biden trailing her on this characteristic. 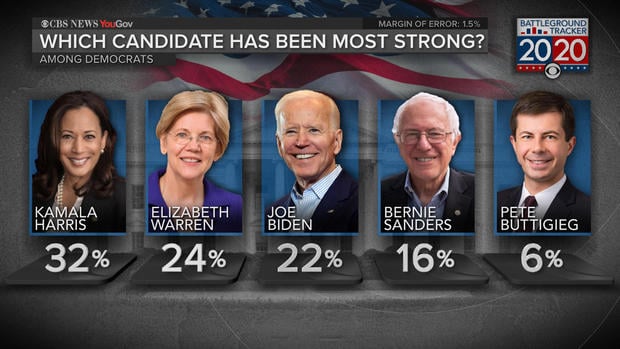 The desired approach to campaigning may also mark a divide among Democrats. Most Democratic voters aren’t as interested in the candidates highlighting their differences with each other (41%) as they are in hearing how candidates would run against Mr. Trump (59%).

Turning to the early-voting states, Biden continues to have a comfortable first-choice lead in South Carolina, which would net him the bulk of delegates there; but New Hampshire is far closer, with Biden ahead of Sanders, Warren and Harris. Each candidate would get delegates out of the state. The first caucuses, in Iowa, are also tight, with Biden ahead within the top tier in percentage, and tight in the delegate count. 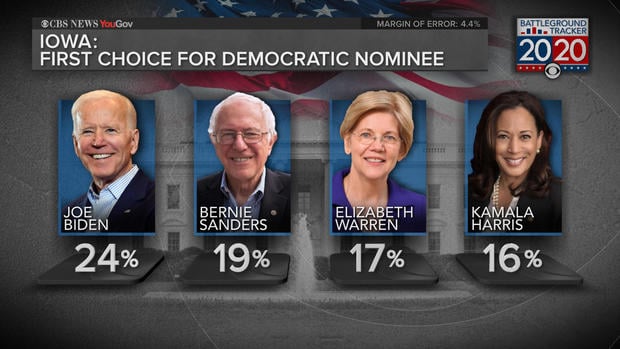 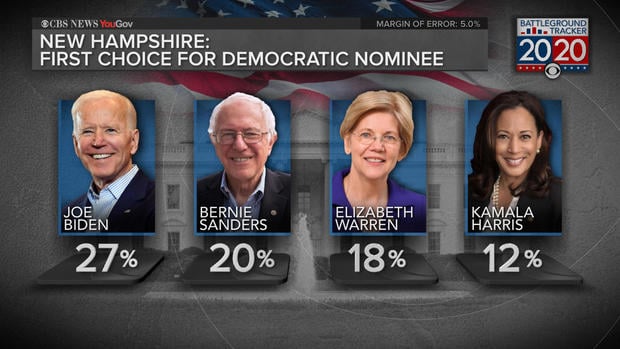 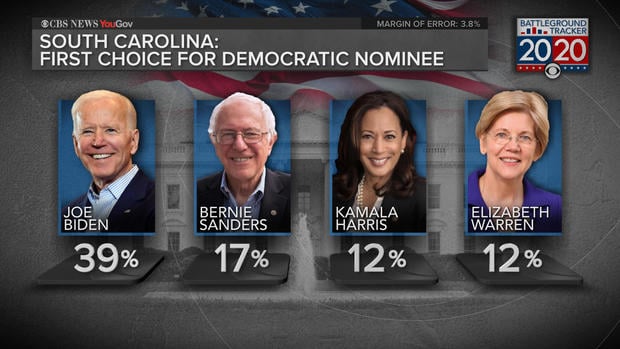 Harris’ debate performance was one of the main reasons given by Democratic voters who said they are now considering voting for her, but had not considered her last month.

Warren and Harris also both improved on their perceived electability versus Mr. Trump (+10 points for Harris and +6 for Warren) — that critical test for Democrats. However, both still trail Biden here.

About half of Democrats reported watching the first Democratic primary debates live, with most of the others saying they saw highlights or read about them afterward. Most Democrats say the debates can tell you at least some about the candidates, though only three in ten say they can tell you a lot. Still, three in four Democrats say they are at least somewhat likely to watch the next debates.

This CBS News survey was conducted by YouGov between July 9 and July 18, 2019. A representative sample of 18,550 registered voters in 18 states expected to hold early primaries and caucuses (Alabama, Arkansas, California, Colorado, Iowa, Maine, Massachusetts, Minnesota, Nevada, New Hampshire, North Carolina, Oklahoma, South Carolina, Tennessee, Texas, Utah, Vermont, Virginia) was selected. This sample includes 8,760 self-identiﬁed Democrats and Democratic-leaning Independents. This sample was weighted according to gender, age, race, and education based on the American Community Survey, conducted by the U.S. Bureau of the Census, as well as 2016 presidential vote. The margin of error is approximately 1.5 percentage points.