Tropical Storm Kay to bring moisture and rain chances to the Southwest, including Tucson, Arizona

For those headed to Tucson (or already there) for the Mississippi State/Arizona football game Saturday, expect rain chances to increase Friday as a result of moisture from TS Kay The worst of the heavy rain should remain over southern California, but western Pima Co. in Arizona remains in a flood watch.

Scattered showers are expected through the day Saturday as well, even as Kay continues weakening and drifting west away from the SoCal coast. A few lingering downpours are possible during the evening near kickoff, but hopefully the rain dodges the stadium! 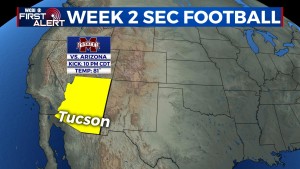 Despite scattered rain Saturday, highs are still expected to reach the lower 90s during the day. Expect a kickoff temperature in the upper 70s to low 80s.