TUPELO, Miss. (WCBI) – A Tupelo Infant is in a Memphis hospital. The child’s parents are in the Lee County Jail charged with Felony Child Abuse.

On Saturday Tupelo Police were told that a 4-month-old infant had been taken to the emergency room at North Mississippi Medical Center. The child had to be airlifted to LeBonheur in Memphis.

Tupelo Police went to Memphis to continue the investigation.

That investigation led them to suspect the child’s parents – Megan Riley and Janson Nabors, both of Tupelo. 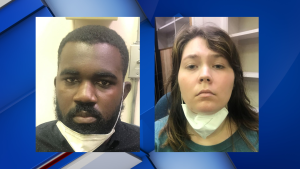 Riley and Nabors were arrested yesterday and charged with Felony Child Abuse.

A Tupelo judge has set their bond at 1 million dollars apiece.

The child’s condition is reportedly improving but still critical.