Turning an ocean menace into a meal

Off the Northern California coast, there is a crisis beneath the waves. The kelp forest – seaweed that provided habitat and food for much of life in the ocean – is gone, wiped out by an exploding population of purple sea urchins.

The seabed has become an underwater desert. “This is mostly now a lot of rock, a lot of sea urchin, and not a whole lot of anything else,” said research scientist Laura Rogers-Bennett.

As kelp forests off America’s West Coast are being decimated by voracious sea urchins, threatening other species’ survival, a unique partnership between scientists and a seafood company hopes to turn a menace into a meal. CBS News

Since 2014, 95% of the kelp forests from San Francisco to Oregon have disappeared. At the Bodega Marine Laboratory in Bodega Bay, Calif., Rogers-Bennett has been studying the spread of the voracious urchins.

“Underneath is the mouth, and there are five white jaws in the center,” she explained to correspondent John Blackstone. “They can chew through rock.”

Rogers-Bennett said a warming ocean is believed responsible for upsetting a natural balance of ocean predators that has allowed the purple sea urchins to dominate, and not just in California. Other sea urchins around the world are thriving, too.

“As the oceans have warmed, the urchins seem to be the winners, and they are really thriving and taking off, which is bad news for the kelp forest,” Rogers-Bennett said. 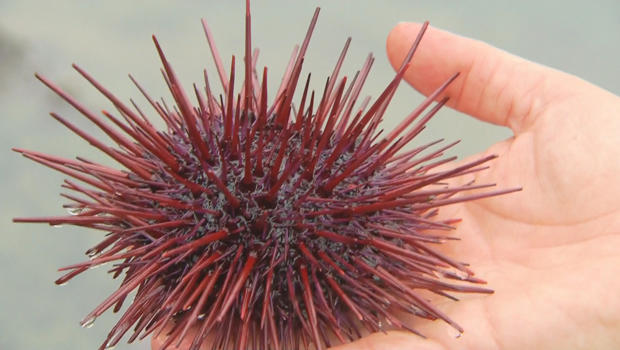 But to Brian Takeda, the CEO of a company called Urchinomics, all those sea urchins look like a business opportunity.

“We convert them from an ecological pest to one of the world’s most premium seafood products, or uni, in a matter of six to twelve weeks,” Takeda said. “So, we’re essentially monetizing the problem species that you want to get rid of.”

Sea urchins are considered a delicacy, particularly in Japan. So, Urchinomics is working with the Bodega Marine Laboratory to collect urchins in the ocean, and then fatten them up on seaweed pellets.

Karl Menard runs what amounts to an urchin feedlot. 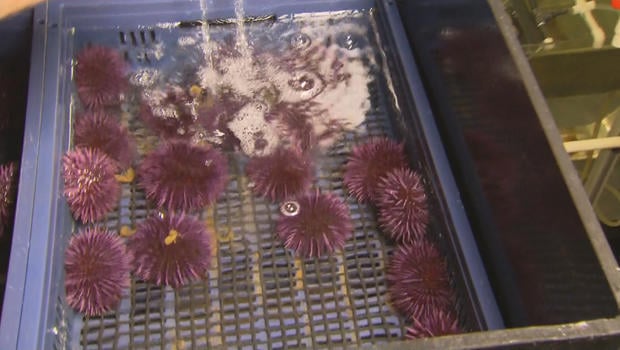 Blackstone asked, “When you feed them these pellets, are they going to be delicious themselves for us to eat?”

“So far, all indications are that they are a very high quality and very delicious,” Menard replied.

Turning a menace into a meal!

By next year, Urchinomics hopes to sell these urchins locally to sushi and seafood restaurants, and to chefs looking to try new recipes.

The Swan Oyster Depot in San Francisco serves sea urchin, and welcomes a new supplier. “You always have to have your eyes towards the future and other possibilities,” said general manager Kevin Sancimino. 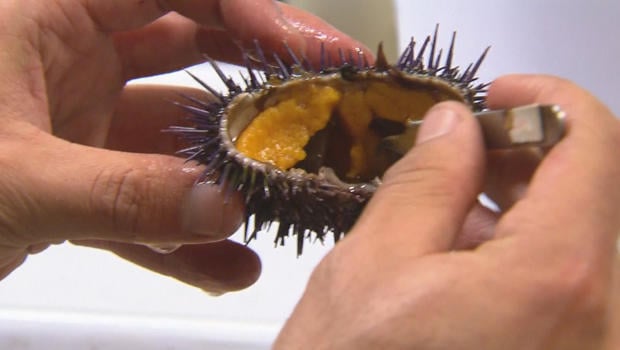 Urchinomics is running similar projects in Taiwan, Japan, Norway and Canada, which are all losing kelp forests to urchins.

Takeda said, “These are restorative urchins, meaning that the more urchins you eat, the better the environment becomes. So, it’s a very different value proposition from all of the seafood that we know of today.”

Urchinomics hopes Americans can be convinced to eat more urchins, before the urchins eat up even more of a vital part of our ocean environment.