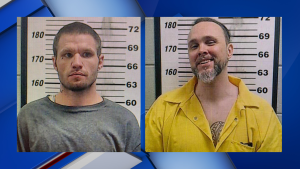 According to the Sheriff’s Office, Joshua Miller, who is serving a life sentence for murdering his girlfriend and other gang-related charges, and Dillon Heffker, who is there on gang-related drugs and weapons charges, had threatened to assault the “smallest female guard” during the week.

On Sunday, while on a facetime call on a tablet, they reportedly tried to incite a riot among the other inmates.

Patrol Deputies were sent to the jail to regain control. When Miller reportedly failed to comply, he was struck in the body with a less than lethal round.

According to the department, Miller then began “screaming like a small child” and claiming to have been shot in the face while still on the facetime call.

When a deputy tried to cuff Miller, Miller reportedly bit him multiple times. Corrections officers held off Heffker, who they say was trying to assault the deputy with a TV.

Another deputy was bitten in the struggle.