Two identified and charged after pursuit through Lowndes County

The driver, 25-year-old Jason Dickerson, is charged with possession of methamphetamine and felony fleeing.

The passenger, 34-year-old James Stewart, is charged with possession of meth.

Charges are pending with the Columbus police department. 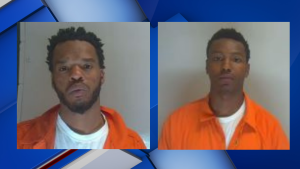 As the pick-up approached the checkpoint, investigators say it swerved and sideswiped a patrol car, and drove away.

The pursuit went out to Lee Stokes Road, near the Alabama state line, and ended in southern Lowndes County on John Smart Road.

Law enforcement put out spike strips along the way to try and end the pursuit but was unsuccessful.

Hawkins tells WCBI the men were allegedly throwing items out of the truck before it crashed into a tree.

Dickerson and Stewart ran after the crash but were arrested.

Meth was found inside the truck.

No one was injured in the chase.