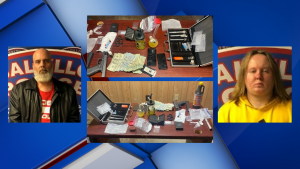 Officers responded to a house on Mobile Street around 7:30 am.

They took William Roberts and Thomas Hayes into custody. Hayes had allegedly fired his gun into the air during the incident. No one was hurt.

Officers recovered the gun, ammunition, and a large amount of meth and paraphernalia.

North Mississippi Narcotics is assisting with the case. More charges are possible.

Meady indicted in connection with a Columbus shooting