COLUMBUS, Miss. (PRESS RELEASE) – Seven Mississippi University for Women voice majors advanced to the semifinal round and three advanced to the finals at the Southern Regional Student Auditions of the National Association of Teachers of Singing.

“Our W singers invested the time and effort necessary to be solidly prepared for this competitive experience. All of our semifinalists gave inspired performances and sang well. On top of that, they demonstrated high levels of collegiality and mutual support for one another throughout the entire process,” said Dr. Susan Hurley, associate professor of voice at The W. “Working with them has been an absolute joy, and I’m extremely happy for their success.” 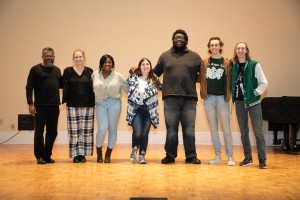 The first two rounds of the competition were held on Nov. 10 and 11 on the campus of the University of Louisiana at Monroe. The finals were on Nov. 12 at the Parkview Baptist Church in Monroe, Louisiana.

Jerry Brown, a tenor, and music education major, won first place in Older Student Adults with his performance of “Lord, I just can’t keep from crying” by Margaret Bonds. Ri’Carrdo Byrd, a bass-baritone and music education major, placed third in Advanced Musical Theatre for Tenors, Baritones, and Basses with a performance of “Evermore” from “Beauty and the Beast.” Moira Cairns, a soprano and music therapy major, won third in Younger Student Adults singing the German Lied “Er ist gekommen in Sturm und Regen” by Clara Schumann.

The competition included 256 student entrants from Arkansas, Louisiana, and Mississippi. In addition to competing, students also attended conference presentations and recitals and participated in masterclasses. The W’s Ri’Carrdo Byrd was one of five student singers selected to perform on a special “American Negro Spirituals” masterclass on Nov. 11 at Parkview Baptist Church, where he sang “Deep River” as arranged by Harry T. Burleigh.

In addition to the singers named above, The W’s semifinalists included Shakia Butler, Ricky Dubuisson, and Tiffani Jernigan. All seven W singers are voice students of Hurley.

NATS is the largest professional association of singing teachers in the world, with over 7,000 members. NATS members teach at colleges and universities, independent studios, and secondary and community schools. NATS supports teachers and students of singing through publications, masterclasses, internships, student auditions, and more.