WEST POINT, Miss. (WCBI) – The four teens charged in a deadly Clay County shooting have been indicted for capital murder.

Emerson Houston, Austin Hill, along with brothers Greyson and Jeremy Klutts, and Junior were all indicted by a Clay County grand jury. 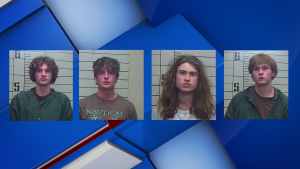 A trial date has not been set.

All are being charged as adults and were given no bond, except for Jeremy Klutts Jr.

He is out on bond pending a hearing later this week.

The young men are charged with the shooting death of Mikel Craven.

He was found lying in a ditch on Blake Road on March 11th and later died at the hospital from his injuries.

Investigators believe robbery was the possible motive in the homicide.

Hill was also indicted on an attempted murder charge for an unrelated stabbing last October.