32-year-old Charlie Hemphill, of Louisville, is wanted for questioning.

The hold-up happened on March 22nd at Crossroads Store in Winston County. 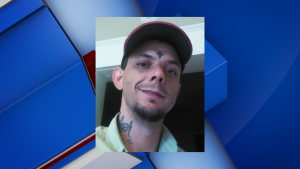 If you know where Hemphill is call Winston County Crime Stoppers.

You may remember this surveillance video from the convenience store.

Winston County Sheriff Jason Pugh says the accused robber made off with about a thousand dollars in cash and a couple of cartons of cigarettes.

Austin Goodin was arrested in Choctaw County in connection with the armed robbery.

No one was injured in the robbery.