MIAMI, Fl (WCBI) — Hurricane Dorian continues to strengthen Friday Morning and barrel towards the Florida coast.  President Donald Trump said Dorian could be an “absolute monster” if it makes landfall as the National Hurricane Center projects.

In a video posted to twitter Thursday Evening, President Trump said, “All indications are it’s going to hit very hard and it’s going to be very big.”  As uncertainty remains on the exact landfall location, meteorologists and forecasters say that much of Florida will experience damaging winds, high surf and heavy rains as it moves closer.

As of 7 A.M. Friday CDT, the National Hurricane Center said Dorian was a Category 2 storm with sustained winds of 110 mph, with wind gusts up to 125 mph.  The storm was expected to strengthen into a major Category 3 storm Friday afternoon and into a potentially catastrophic Category 4 storm into the weekend.  At it’s peak intensity before landfall, the storm was forecast to have sustained winds of 140 mph with gusts as high as 165 mph. 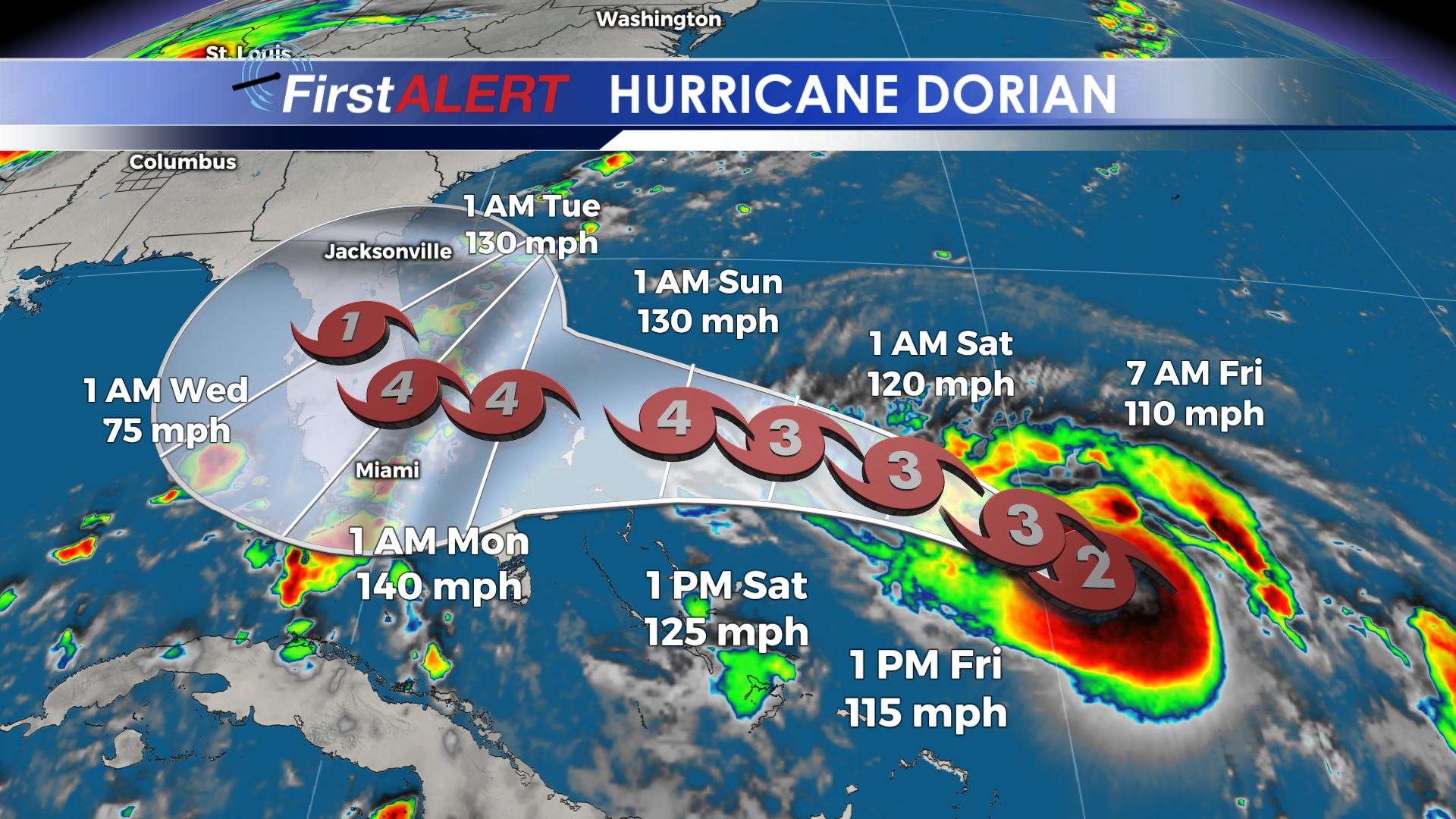 (7 AM CDT Forecast Projection from the National Hurricane Center)

So far, no immediate mass evacuations were ordered, but residents were still preparing for the storm.  Shortages of food and water were reported at grocery stores, and long lines for gas continued overnight Thursday.  Local governments were announcing sandbag distribution sites and encouraging residents to get ready now, well before the storm’s arrival Monday into Tuesday.  Many others have already left the state.

As the storm barrels west, the National Hurricane Center says that landfall would be most likely in South Florida, but could still happen in an area from the Florida Keys northward to Jacksonville.  Once ashore, the storm would take a north turn up the Florida Peninsula and likely bring heavy rain along the Mid-Atlantic Coast.  Still, uncertainty remains on it’s exact track, and the cone of uncertainty covers the entire state of Florida.

While Dorian would bring severe winds to the coast, another growing concern is the slowing forward speed for the storm.  A slower storm not only would allow it to strengthen, but likely lead to prolonged rainfall as it passes through.  Recent estimates suggest between 1-3 feet of rain would be likely in parts of Florida as the storm pushes north.

Stay with the latest forecast on Dorian with our WCBI Meteorologists.  They’ll keep updates coming on the WCBI Mobile App as well as on WCBI.com/weather.