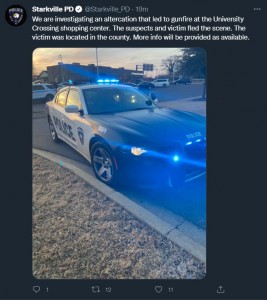 STARKVILLE, Miss. (WCBI) – Starkville police  have arrested two suspects for the shooting at Rue 21 at the University Crossing shopping center.

The victim fled the scene and was located in the county.

According to sources, the weapon has been recovered.

If you know anything about the situation contact Starkville Police Department.

We will have more information as it becomes available.