MONROE COUNTY, Miss. (WCBI) – A Columbus man led deputies on a chase through 2 counties after he allegedly stole a car in Hamilton. 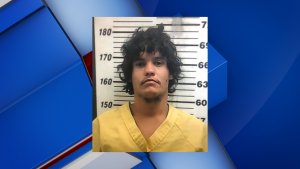 According to a social media post from the Monroe County Sheriff’s office, 28-year-old Ricky Ray Sanders is accused of taking a car from the parking lot of the Dollar General store.

A Monroe County Deputy tried to stop Sanders on Hwy 45 near Nettleton, before pursuing him into Lee County.

The chase went through Shannon and Verona where witnesses say he almost hit an officer.

The pursuit continued into Tupelo.

That’s when Sanders turned down a dead-end road. At that point, he took off on foot.

The Monroe County deputy was able to chase him down and arrest him.

The vehicle was safely returned to the owner with minor damage.

Units from all those agencies assisted in the pursuit.