ABERDEEN, Miss. (WCBI) – The group Mississippi Dreams Prisoner Advocacy has posted pictures and video of the “planned assault” that the sheriff’s department says happened at the Monroe County Jail on Sunday.

The images were recorded during a video call between Tillie Miller and husband Joshua Miller, who is serving a life sentence for murdering his girlfriend and other gang-related charges.”

In a statement to WCBI, Tillie says that during the video call, Joshua was taken to the ground and shot with the non-lethal round. 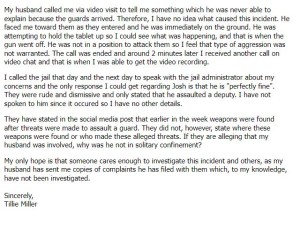 “That first deputy that responded, he’s a less lethal instructor actually,” says Monroe County Sheriff Kevin Crook. “He was able to go in there with a gun that shot (either) rubber bullets or a beanbag round and after failing to comply several times, he fired that round (at Joshua) and that’s when (the inmate) put on a show.”

Tillie claims her husband was not in a position to attack and says the force deputies used was not warranted.

But Monroe County Sheriff Kevin Crook says this was a planned attack by Joshua and alleged accomplice Dillon Heffker, who is serving time for drugs, weapons and gang-related charges.

“It just seemed like they had a plan from the get-go to try to film this, for whatever reason,” he says.

The sheriff is also concerned that this incident could be just a precursor to something even more serious.

“We don’t know if they were, at this point, planning this as a trial run for something else that they were getting ready to do,” the sheriff says. “Or was this an attempt at that?”

Sheriff Crook says the two men were increasingly menacing to both fellow inmates and jail staff  in the week leading up to the attack, including threats to hurt their “smallest female guard.”

The sheriff says the incident started when Miller and Heffker staged a disturbance.

“They were throwing their food trays and everything on the floor to get us to get the corrections officers to come in there and have to clean it up,” he says.

Sheriff Crook says two of his deputies responded and Joshua started “screaming like a small child” into the tablet he was using to video chat with his wife after the deputy shot him in the body (not the face) with the less lethal round.

JUST IN: Federal inmates Josh Miller and Dillon Heffker are accused of attacking deputies/corrections officers at the Monroe Co. Jail this weekend. Sheriff Kevin Crook says no one was seriously injured but the inmates bit 2 deputies & Heffker tried to attack one them with a TV pic.twitter.com/juwKZr0hTv

As the deputy started handcuffing him, the sheriff says Joshua fought back, biting the deputy multiple times.

“The deputy was able to hold him down until backup got there,” Sheriff Crook says. “While holding off the other inmate (Heffker) who had pulled the TV off the wall and was starting towards him with it, I guess to hit him over the head with.”

The sheriff says no one was seriously injured and praised his deputies for how they handled the attack.

“Our guys handled it better than I could,” he says. “Without any anger, their training kicked in. They were able to just do what they needed to do to get that situation under control.”