MACON, Miss. (WCBI) – Two people are in the hospital with severe injuries after a building collapses on them. 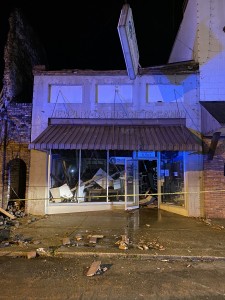 Macon Police Chief Davine Beck tells WCBI the individuals were in the Macon City Drugstore when the wall caved in around 5 pm this evening.

Both victims were taken to the hospital for treatment. Their condition is unknown at this time.

You may be wondering how did this incident unfold—The structure next to the drugstore underwent demolition just a few days ago.

Beck says it’s possible the remaining parts of the building fell and that’s what led to the collapse of the City Drugstore.

WCBI spoke to one survivor who made it out of the building just moments before disaster struck.

” I heard and saw the wall start shaking and completely shaking like it was thundering outside and I took off running through the back door. Employees are going through and I just ran as fast as I could back there,” said Layla Franks, survivor.

” We’re just blessed at happening at the time it happened that it happened in a little bit earlier it’s no telling how many people would’ve gotten trapped or possibly hurt bad,” said Chief Davin Beck, Macon Police Department.