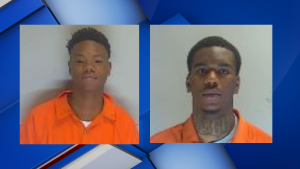 Jaquavious Harris and Jaylen Hodges were both recently indicted by a Lowndes County Grand Jury for armed robbery.

The alleged hold-up happened in July 2021 at a gas station on Highway 182.

Meanwhile, Hodges was indicted for burglary, aggravated assault, and shooting into a business in connection with separate investigations.

Hodges is accused of shooting someone on Christmas Day 2020 and on the same day allegedly shooting into McDonald’s in east Columbus.