Watching Sally as it could impact our weather this workweek

SUMMARY: It’s a quiet start to the new workweek for us with a few scattered storm chances, but all eyes this week will be on Hurricane Sally as the storm pushes towards the Gulf Coast. After landfall, Sally will likely approach our area and bring a threat of heavy rain by the middle of the week. We are also looking at the chance of a cold front which could dry us out and cool us down by next weekend. 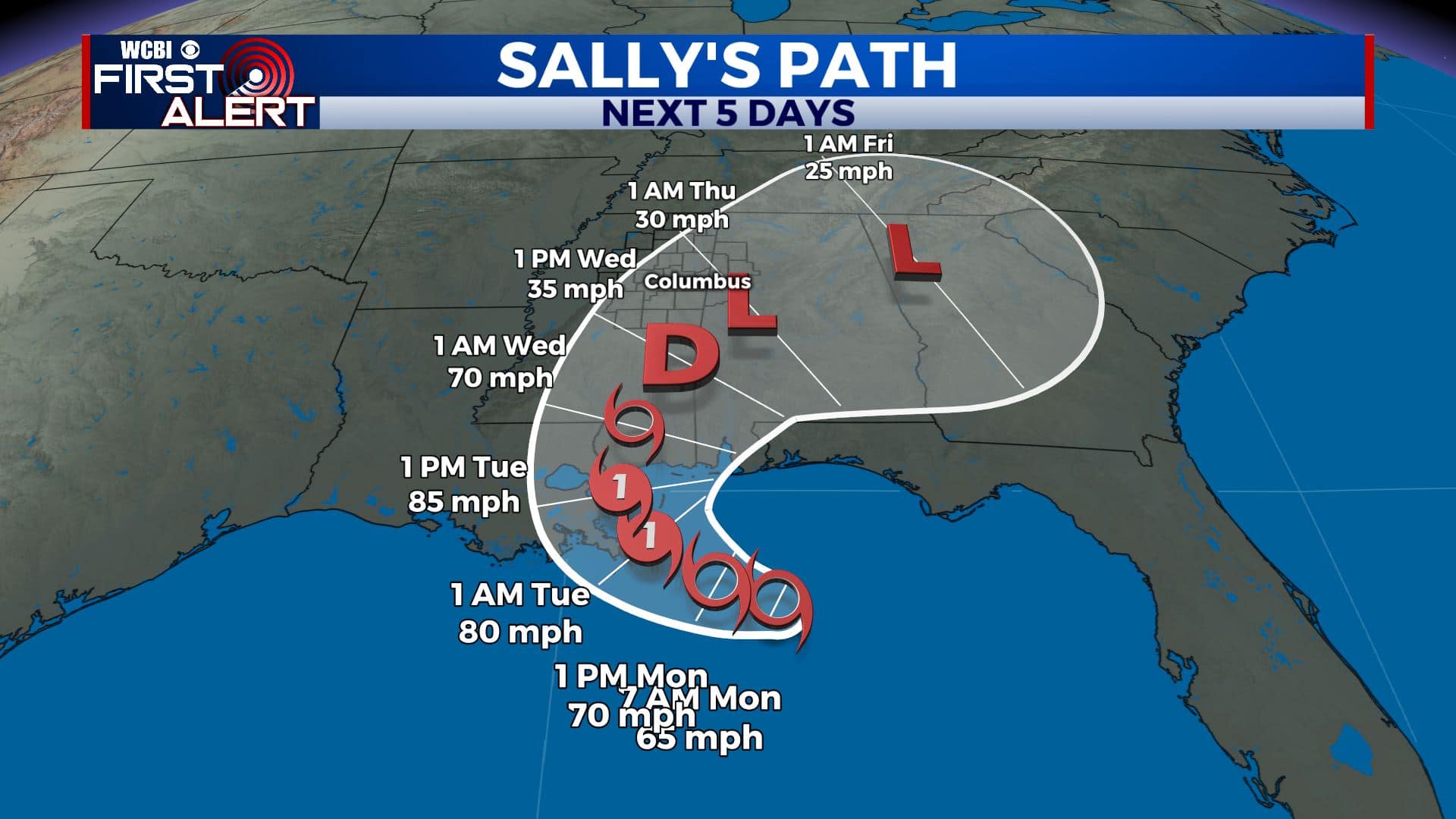 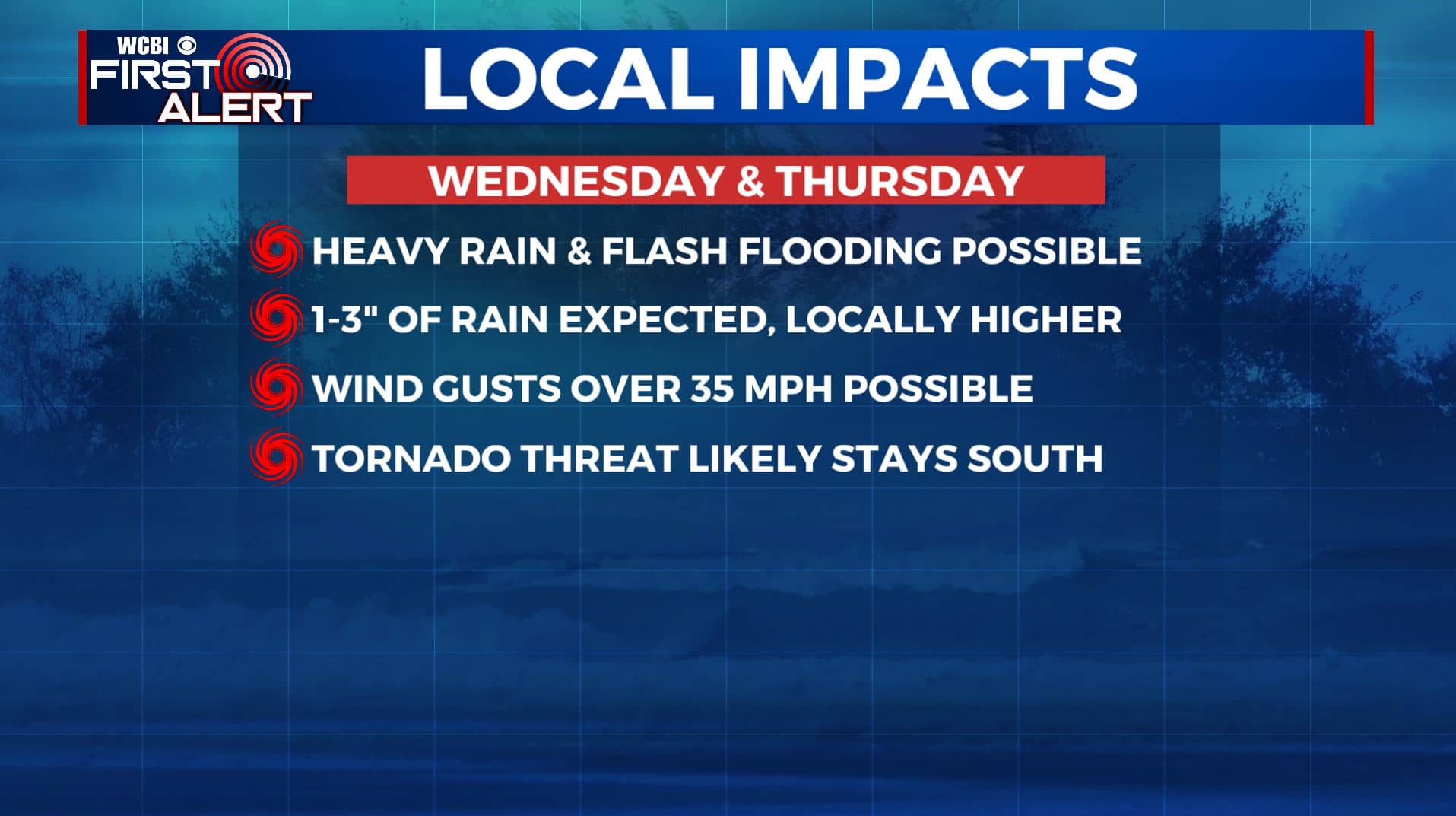 TROPICS: As of Noon Monday, Category 1 Hurricane Sally was located in the eastern Gulf of Mexico. It’s continuing to gain some strength with winds near 85 mph. It’s also continuing to move slowly towards the Gulf Coast. The storm is expected to eventually strengthen into a Category 2 Hurricane before landfall on Tuesday evening. Major storm surge, flash flooding and gusty winds will be issues along the LA/MS/AL coasts, with heavy rain continuing to be an issue further inland.

MONDAY: A typical late summer day is ahead for your Monday. Chances for some pop-up storms will remain in the forecast, but won’t be very widespread. We’ll generally see a mix of sun and clouds with temperatures climbing to the upper 80s to near 90. NE winds a bit breezy at 5-15 mph. 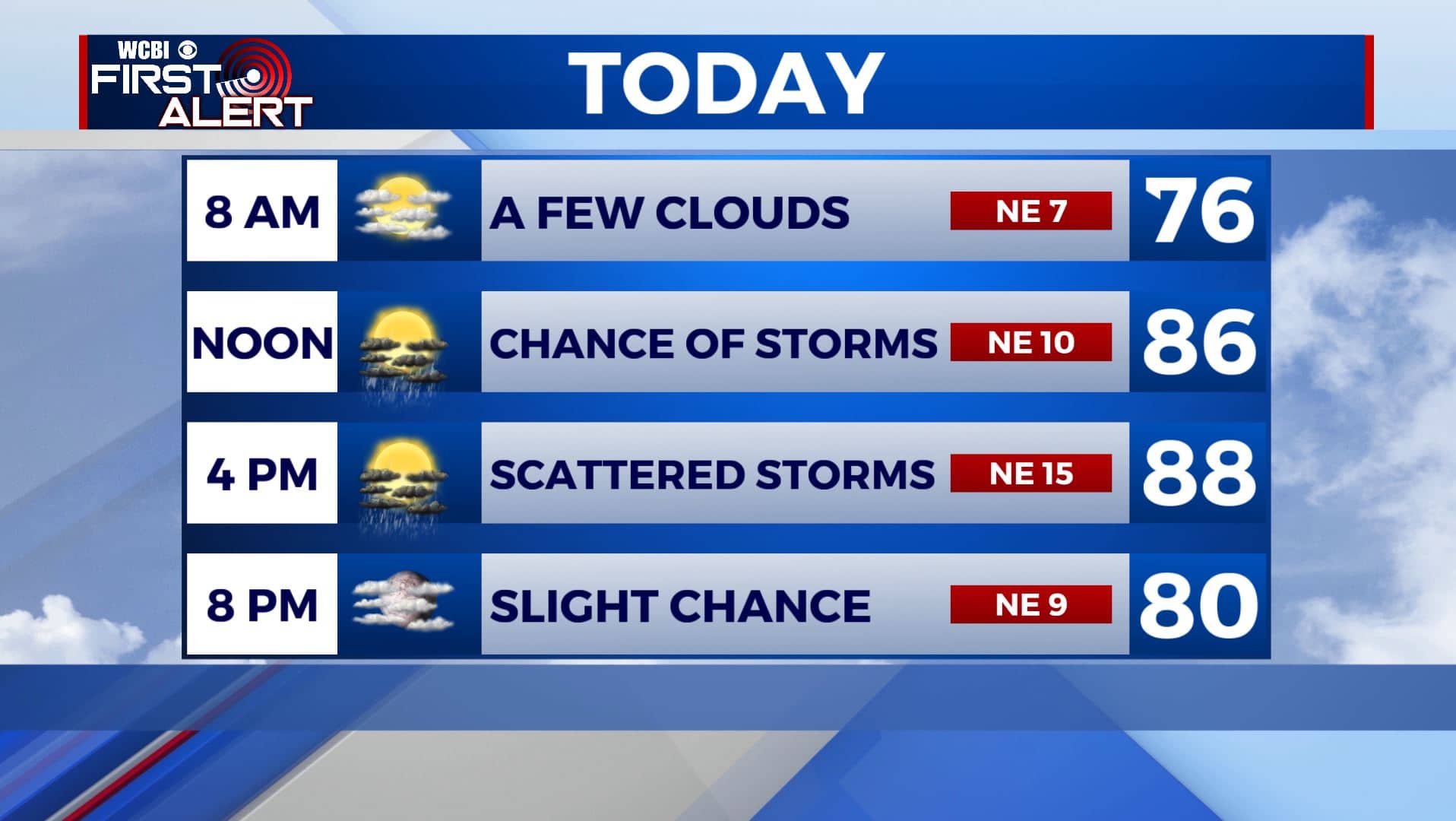 TUESDAY: Chances for some storms will remain in the forecast for our Tuesday with a mix of sun and clouds. Temperatures still warm with highs climbing to the mid to upper 80s. Overnight lows will be in the 70s. 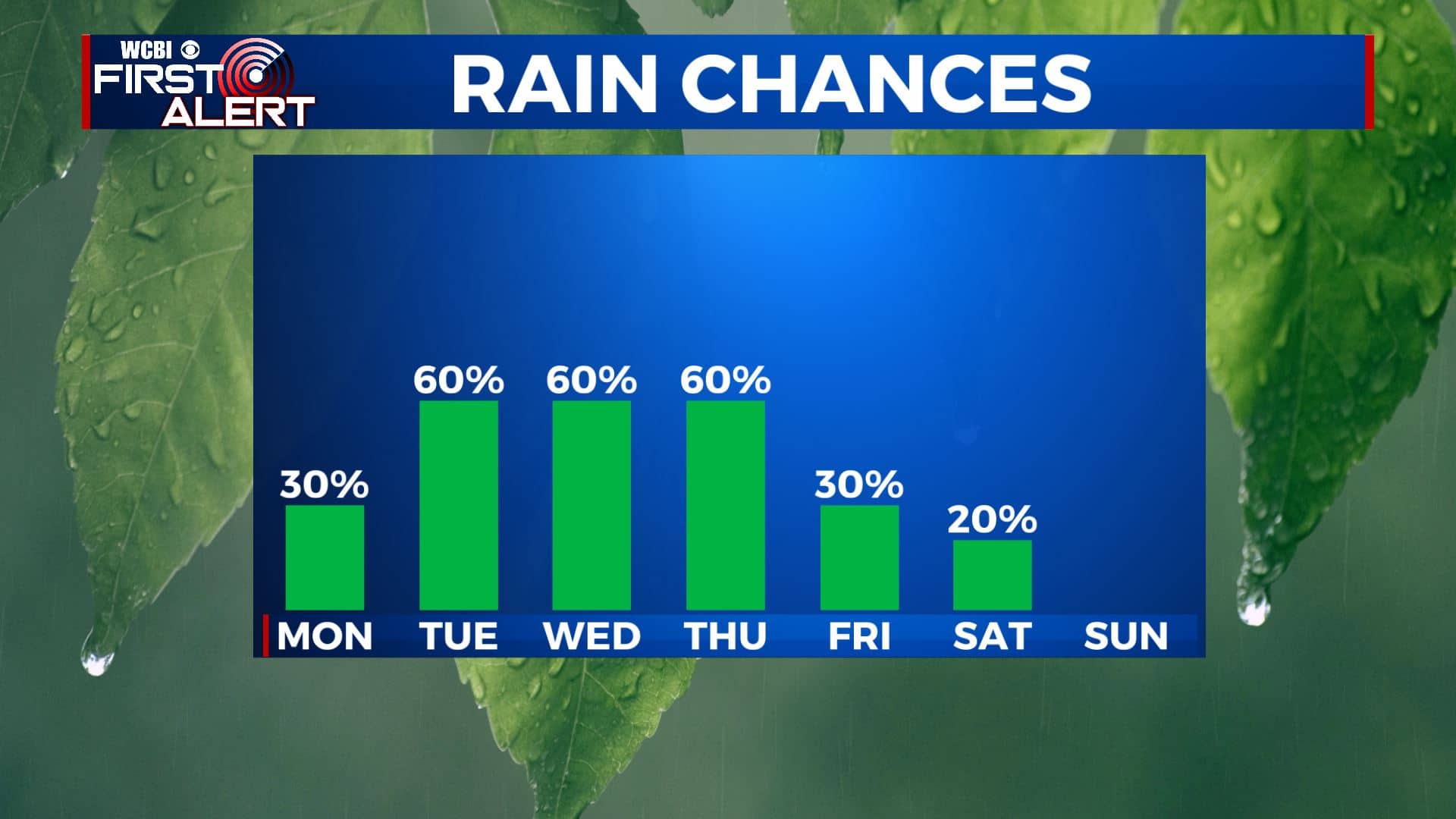 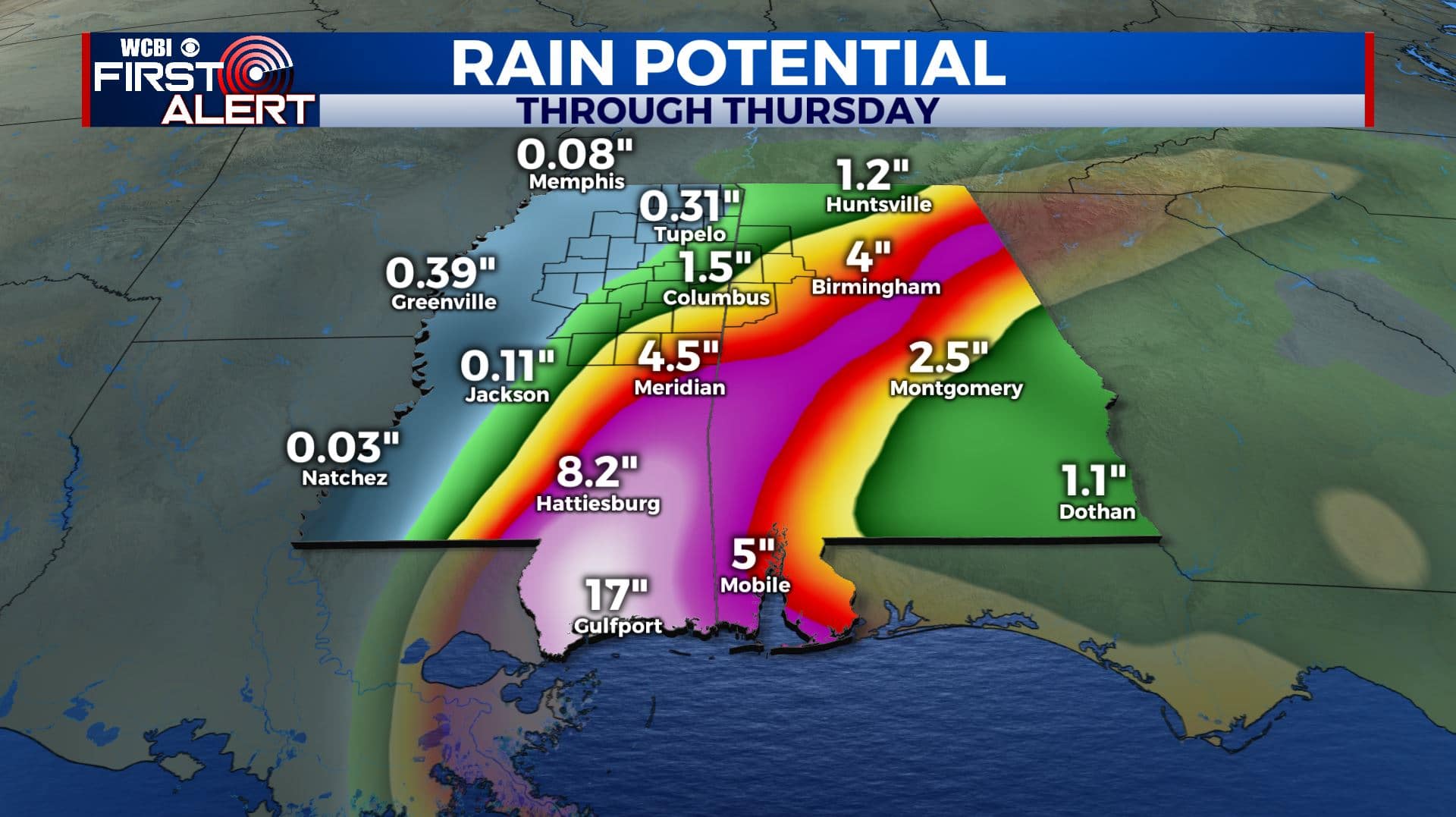 WEDNESDAY-THURSDAY: Impacts from the remnants of Sally will likely be felt in our area by Wednesday through Thursday. We’ll see several rounds of rain during that time. Depending on the exact positioning of the storm, 1-4″ of rain can be expected for many locations, in addition to gusty winds at times. Because of the way this storm is tracking, areas to the north and west may not see as much rain as our southern and eastern counties. The tornado threat with this system looks to remain to our south and east. Rain will help to keep us cooler, with highs only in the upper 70s to near 80 degrees.

FRIDAY-SUNDAY: Our first sample of fall could come with a cold front moving through the area by the end of the week. This will help to move any leftover rain out of the area and knock our temperatures down a bit. Overall, Friday and the weekend is looking dry with a mix of sun & clouds. Highs in the lower to mid 80s. Morning lows will be in the 60s, with a few upper 50s not out of the question.